Switch - How to Change Things When Change Is Hard

Switch is a framework for change that aims to operate on the emotional side, the logical side, and the environment.

By Mathias Verraes
Published on 18 August 2013 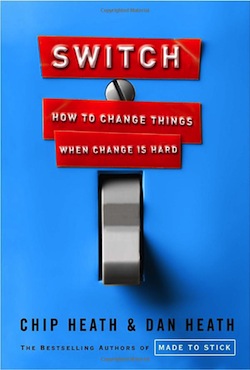 As I wrote earlier, I want to post some quotes and a mini-review of the books I read. “Switch” compares humans in change processes to Rider (our logical side), riding an Elephant (our emotional side) down a Path (the environment). By directing the Rider, motivating the Elephant, and shaping the Path, you can change yourself, a team, an organization, or even society. As with all frameworks, it’s limited (which the authors admit upfront). However, as a consultant who’s made it his professional ambition to help teams and organizations build better software, I definitely found a lot of useful advise. If nothing else, the book will help me see which areas of a change process I haven’t paid sufficient attention to. What most appealed to me, was the idea of finding the bright spots. We tend to focus on problems, but if we look at the things people are doing that are in fact working, we can imitate and multiply those.

What looks like a people problem is often a situation problem.

(Contrast this with Weinberg’s «It’s always a people problem.» I don’t think the statements are mutually exclusive.)

(...) people have a systematic tendency to ignore the situational forces that shape other people's behavior. He called this deep-rooted tendency the "Fundamental Attribution Error." The error lies in our inclination to attribute people's behavior to *the way they are* rather than to *the situation they are in*.

Because identities are central to the way people make decisions, any change effort that violates someone's identity is likely doomed to failure. (That's why it's so clumsy when people instinctively reach for 'incentives' to change other people's behavior.) So the question is this: How can you make your change a matter of identity rather than a matter of consequences?

I can recall a number of occasions where a manager attempted to bribe a team into delivering faster, at lower quality, even though the team was priding itself on its craftsmanship.

Also, *cognitive dissonance* works in your favor. People don't like to act in one way and think in another. So once a small step has been taken, and people have begun to act in a new way, it will be increasingly difficult for them to dislike the way they're acting. Similarly, as people begin to act differently, they'll start to think of themselves differently, and as their identity evolves, it will reinforce the new way of doing things.

In the business world, we implicitly reject the growth mindset. Businesspeople think in terms of two stages: You plan, and then you execute. There's no 'learning stage' or 'practice stage' in the middle. From the business perspective, practice looks like poor execution. Results are the thing: *We don't care how ya do it, just get it done.*

Learning is the bottleneck. Also see: «The management question, therefore, is not whether to build a pilot system and throw it away. You will do that. (…) Hence plan to throw one away; you will, anyhow.» - Fred Brooks

Everything can look like a failure in the middle.