The System Kicks Back, Gets In The Way and Opposes Its Own Proper Function. Your own perspective becomes distorted by being In The System.

By Mathias Verraes
Published on 10 August 2013


Jon Jagger regularly posts snippets from books he’s read on his blog. I think this is an excellent habit, that has helped me to discover some very interesting books, so I want to start doing the same.

“Systemantics. The Systems Bible” by John Gall is a classic work from 1975. It deals mostly with the idea that one cannot simply design a large complex system, and expect to predict its entire set of behaviours. It’s one of those books that help you see the world as it is. Although it mostly deals with failing systems and the dangers of complexity, it is, almost inadvertently, a book on problem solving – even though it claims that “problems are not the problem. Coping is the problem.” 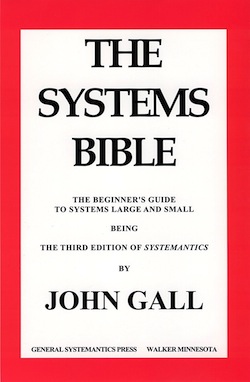 In setting up a new System, tread softly. You may be disturbing another System that is actually working.

The word "Solution" is only a fancy term for the Response of System A (ourselves) to System B (the Problem). And its a misleading word, because it implies something that can be done once and for all. But System B is sure to Kick Back in response to our Response, and then we must respond once again.

As events get further and further ahead of the System's inappropriate responses, the Model of the Universe generated in the control room by such Wishful Feedback bears less and less resemblance to outside reality. The System *hallucinates* its way to Terminal Instability. In summary: Just calling it "Feedback" doesn't mean that is had actually fed back. To speak precisely: It hasn't fed back until the System changes course.

And when Anthropologists began to study tribes in their native habitats, they increasingly began to notice that the typical New Guinea family consisted of father, mother, three children, and one or more Anthropologists. In brief, there can be no System without its Observer.

Systems are seductive. They promise to do a hard job faster, better, and more easily than you could do it by yourself. But if you set up a System, you are likely to find your time and effort now being consumed in the care and feeding of the System itself. New Problems are created by its very presence. Once set up, it won't Go Away; it Grows and Encroaches. It begins to do Strange and Wonderful Things and Breaks Down in Ways You Never Thought Possible. It Kicks Back, Gets In The Way and Opposes Its Own Proper Function. Your own perspective becomes distorted by being In The System. You become anxious and Push On It To Make It Work. Eventually you come to believe that the misbegotten product it so grudgingly delivers is What You Really Wanted all the time. At that point, Encroachment has become complete. You have become absorbed. You are now a Systems-person.

(..) persons or Systems in this unblessed state often adhere strongly to a bizarre Systems-delusion, the Inevitability-of-Reality fallacy, the belief that: Thing have to be the way they are and not otherwise because that's just the way they are.

The problem is a Problem precisely because it is incorrectly conceptualized in the first place, and a large System for studying and attacking the Problem merely locks in the erroneous conceptualization into the minds of everyone concerned. What is required is not a large System, but a *different approach*. Trying to design a System in the hope that the System will somehow solve the Problem, rather than simply solving the Problem in the first place, is to present oneself with two problems in place of one.