By Mathias Verraes
Published on 05 September 2013

Many teams are not spending enough time on modeling. Often, they’re not particularly good at it, and often, the business considers time spent at the whiteboard “unproductive”. The goal of the Modellathon workshop, was to give people a safe environment to play around with different modeling techniques, without the pressure of producing something of immediate value. For more experienced attendees, it’s an opportunity to exercise their modeling skills on a new and unfamiliar domain.

By collaborating with people, and by learning from the models of the other teams, the attendees get a glimpse of the myriad of techniques that exist (often not documented anywhere) to explore, grasp, and visualize, their understanding of the domain.

See the slides on Speakerdeck 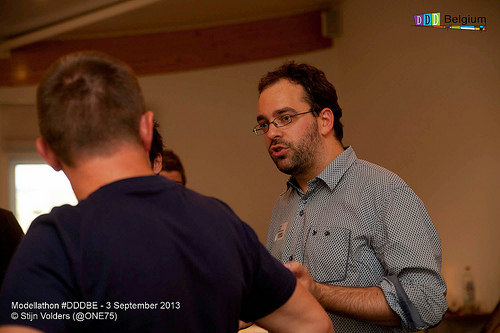 We formed teams of four people. Each team was provided with plenty of paper, markers, and stickies. Stijn and me played the role of domain experts. We gave a short introduction about “The United Schools of Kazachstan”. This domain was obviously made up, but most of what we talked about, comes from a real project we are working on. We gave the people a paper report card for a Kazach pupil, and told them we wanted a better system for making the reports. Along the way we introduced more complexity: the different ways pupils can be evaluated, the laws and governmental regulations, the importance of the progress a pupil makes, and the confidentiality of the pupils.

In two rounds of 25 minutes, the teams got to work to try and draw the problem space into a model. Meanwhile, Stijn and I walked around to answer questions. Just like real domain experts, we sometimes took things for granted, or casually mentioned some new piece of critical information.

For the third round, we shifted the focus from understanding the domain, to modeling a somewhat workable solution. Yves and me now tried to give guidance on techniques, and give the teams some pointers. For example, I showed one team how to get started with Event Storming. Another team had already produced a very detailed and complete model, so I told them that if this were a real application, the teachers would have to spend too much time entering data, and too little time actually teaching. This forced the team to re-evaluate some of their assumptions. 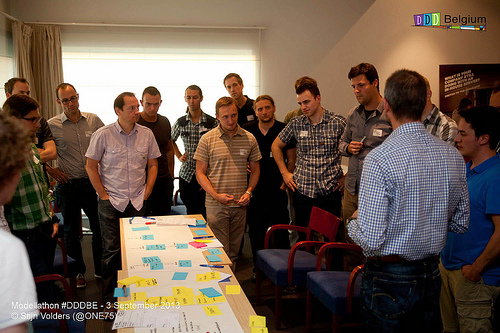 After each round, a couple of teams presented their progress. Some had UML-like drawings, others had mostly stickies with words, some had drawn UI mockups as a starting point. It was quite wonderful to see how distinct each team’s model was, despite the short time frame. Even after the first 25 minutes, it was surprising to see how much the teams had already captured of the problem space.

At the end, we had an improvised round table discussion, about the challenges involved with modeling complex domains, where many people contributed their insights.

What I’ve learned as a facilitator

In attempt to distribute people of different levels evenly across the teams, I asked who was an experienced modeler. No reaction. (Belgians especially can be shy in this regard.) Tom then asked “who had previously screwed up a model”. Some people raised their hands, so that proved a much more effective way to find the attendees with modeling experience!

Somebody told me aftwerwards that he would have preferred to first get an overview of modeling techniques. On the other hand, struggling with a problem is a really good way to learn. It triggers your instinct to look for better ways. And, when somebody then shows you a new technique, you immediately recognize why it’s better. Perhaps, a good approach would be to have the teams try it for themselves during one or two rounds, and then have a short presentation on one or two techniques they can try. You’d probably need more time, 3-4 hours at least. 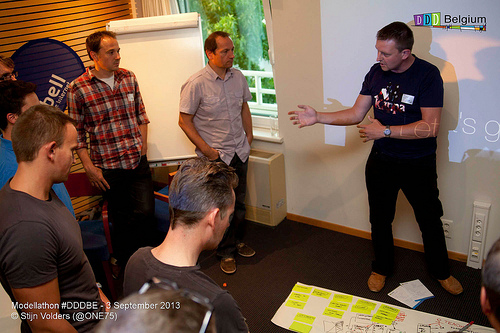 As a facilitator, it’s easy to get carried away with explaining the domain. It’s important to be aware of teams that have trouble moving forward. It’s better to step out of the domain expert role, and help them move forward. Perhaps a good approach would be to have different people in the expert and in the facilitator role (which is more or less what we did when Yves starting helping out in the third round.

Throw away the models

We gave teams the choice of working on the same model round after round. In retrospect, it might have been better to explicitly ask them to throw everything away. This way, you give yourself the opportunity to start over with a different technique, borrowed from another team’s presentation. Some teams became quite attached to their models, which limited their progress. Kill your darlings!

Using the Pomodoro’s and having a few minutes of feedback proved extremely useful. I tended to provide the options, and have the attendees choose, but soon I noticed that they came up with better ideas than me. So as a reminder to myself: the group is smarter than the individual!

It was a miracle that we had so much attendees for our brand new Belgian Domain-Driven Design community, and that all these people were prepared to run this experiment with us. In fact, I don’t think anything like a modellathon was ever attempted anywhere else. Let me know if you do.

In any case, I can highly recommend running a modellathon of your own. And, incidentally, I’d love to come facilitate it :-)