Antifragile - Things That Gain from Disorder

Robustness only goes so far. Embrace a system's natural antifragility.

By Mathias Verraes
Published on 29 August 2013

Taleb introduces the term antifragile for systems that don’t simply stay the same when subjected to stressors, volatility, and exceptions, but that actually change for the better.

We tend to naively intervene in systems, without taking into account their natural antifragility. Take wildfire. If we attempt to stabilize - that is, prevent wildfires from happening - we believe we make the forest more robust. But over time, the combustible materials in the forest accumulate. When they finally do catch fire, the resulting damage is much larger. Even though the parts of the system, when left alone, are more fragile, the whole is antifragile. Just like bailing out banks can give us some temporary perceived stability, but can lead to bigger disasters in the long term.

The book is full of great examples. Taleb tells of of a taxi driver and an office clerk. The clerk has a stable job: he gets paid at the end of the month, and he gets a promotion every five years. The taxi driver on the other hand, has good days and bad days. He’s constantly forced to be creative, experiment to find better spots to pick up customers, try honest as well as less honourable ways to increase his income. Then 2008 hits, the clerk suddenly loses all of his income at once, and finds himself on the street with no survival skills to speak of, and no experience with selling himself in interviews. The taxidriver might take a hit from the recession, but his years of being subjected to highs and low, made him antifragile.

Even though small economic units may be fragile, the fragility of the parts can make the system as a whole more antifragile. (Compare to John Gall’s “An airplane is a system that consists of parts that tend to fall down.”) 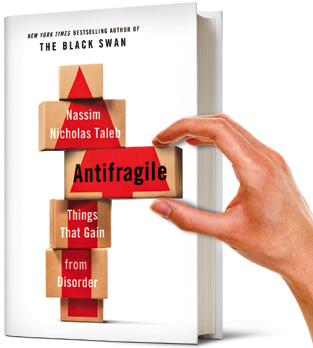 I feel Antifragile is one of the most important books I’ve read in ages. Neither my short explanation above, nor the quotes below do it justice. It’s hard to convey why it’s so gripping. Already I’m seeing everything in my life in the light of the triad fragile - robust - antifragile.

The chief ethical rule is the following: Thou shalt not have antifragility at the expense of the fragility of others.

How do you innovate? First, try to get in trouble. I mean serious, but not terminal, trouble. I hold—it is beyond speculation, rather a conviction—that innovation and sophistication spark from initial situations of necessity, in ways that go far beyond the satisfaction of such necessity (...) The excess energy released from overreaction to setbacks is what innovates!

we can estimate, even measure, fragility and antifragility, while we cannot calculate risks and probabilities of shocks and rare events, no matter how sophisticated we get. Risk management as practiced is the study of an event taking place in the future, and only some economists and other lunatics can claim—against experience—to “measure” the future incidence of these rare events, with suckers listening to them—against experience and the track record of such claims. But fragility and antifragility are part of the current property of an object, a coffee table, a company, an industry, a country, a political system. We can detect fragility, see it, even in many cases measure it, or at least measure comparative fragility with a small error while comparisons of risk have been (so far) unreliable.

A complex system, contrary to what people believe, does not require complicated systems and regulations and intricate policies. The simpler, the better. Complications lead to multiplicative chains of unanticipated effects. Because of opacity, an intervention leads to unforeseen consequences, followed by apologies about the “unforeseen” aspect of the consequences, then to another intervention to correct the secondary effects, leading to an explosive series of branching “unforeseen” responses, each one worse than the preceding one.

We hear about the more lurid post-traumatic disorder, not post-traumatic growth, in the intellectual and so-called learned vocabulary. But popular culture has an awareness of its equivalent, revealed in the expression “it builds character.” So do the ancient Mediterranean classics, along with grandmothers.

In the complex world, the notion of “cause” itself is suspect; it is either nearly impossible to detect or not really defined—another reason to ignore newspapers, with their constant supply of causes for things.

So some parts on the inside of a system may be required to be fragile in order to make the system antifragile as a result. Or the organism itself might be fragile, but the information encoded in the genes reproducing it will be antifragile. The point is not trivial, as it is behind the logic of evolution.